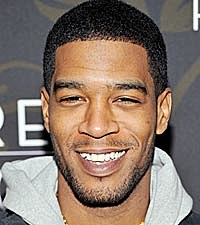 Fans may have thought that Kid Cudi was pulling a prank when he announced he was putting an end to his marijuana habit on April 1, but his close associate Dot Da Genius claims the declaration as legit.

The producer, who helmed his breakout smash 'Day 'N' Nite' as well as a few tracks on last year's 'Man on the Moon II: The Legend of Mr. Rager,' revealed that Cudders ditched smoking weed to get a clear head.

"It was just a conscious decision that he made ... He was in a place where he felt he wanted to be more focused on his stuff. So, one day he was just like, 'I don't smoke no more.' And it was like, 'Oh s---, word?' And he really sticks with it," he told XXLMag.com. "It was a little while in the makin'. Before he announced it on Twitter he had quit for a little bit. It's just somethin' that he just wanted to do for himself."

Dot explained that the lack of green in Cudi's life has rendered him a different person. "He's way more attentive. He sees stuff. He sees things that maybe he wouldn't have seen," he continued. "He's more focused and he's just more driven. And he's a lot more about his business and he's just more of a focused individual."

Additionally, the Grammy-nominated producer touched on Cudi's upcoming rock album 'Wizard,' stating that he isn't entirely ditching his MC past. "Cudi still spits. He's still an MC. So, we're still gonna be putting out Kid Cudi music," Dot explained. "He's still gonna be rapping. There's gonna [be] shades of him doing that on certain songs, but for this particular project, it's just gonna be a different style, a whole different type of essence."