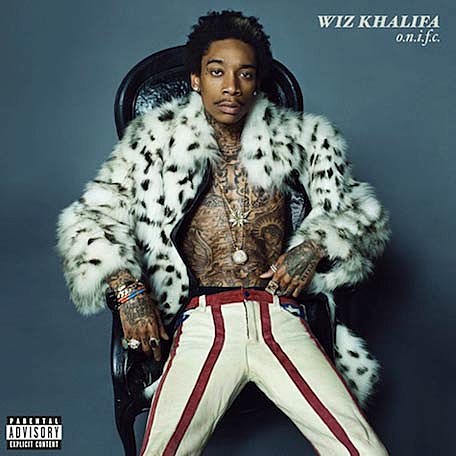 Wiz Khalifa has been hip-hop's biggest hippie for some time now, but in the early morning hours on Wednesday (Aug. 8), he showed just how committed he is to the concept with the release of his sophomore album artwork. For O.N.I.F.C.'s cover, the Pittsburgh superstar lounges in a custom-made fur and striped skinnies, donning gold chains, several rings and a wrist full of bracelets.

The imagery, evoking the spirit of Jimi Hendrix, was immediately polarizing amongst hip-hop heads. Stylist Fatima B., who's worked with Wiz creating looks for many of his videos and his recent Taylor Allderdice mixtape cover, realizes the bold image may be shocking to some.

"I can understand both sides of people getting it or not getting it," she tells The BoomBox. "It's like Kelis [paving the way with her style] six years ago and you see all these artists now [mimicking it]."

According to Fatima, Wiz has embraced this look for nearly two years -- the entire time she's worked with him. The rapper began planning his artwork with the intention of keeping his burgeoning style at the forefront.

"If you see how Wiz dresses now, it already gives you this whole hippie feel," Fatima adds. "This whole '70s vibe. This sleazy, rockstar-type image. This is what we wanted it to be and we wanted people to see the transition from how Wiz used to dress, up until now. This is where we're at with the album, the music. It all goes together."

Wiz himself echoes the sentiment with a post he wrote on Twitter, describing the LP's artwork. "Im Helpin Everyone Get In Touch With Their Inner Sleaze. If U Dnt Wanna Let It Out, Ill Express It For You [sic]," he wrote.

"I know the vision that he wants so he kind of lets me be free with pulling stuff," she reveals. "It's a team decision though."

In the coming months, Fatima B. has a full schedule in an effort to solidify her brand. In addition to building with other musicians, she's collaborating with various stylists, makeup artists and videographers. Her plan is to bring all of these creative types under one umbrella.

For now, she's simply enjoying the response received from her latest work with Wiz.

"We wanted to give people a shock, but it wasn't just that," she insists. "We wanted people to understand the music, his attitude, the weed-smoking, the hippies, the festivals... All of that played into the album cover. It's like a whole lifestyle in a booklet."