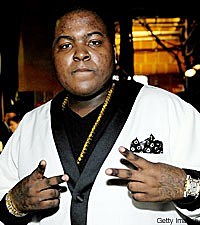 According to reports, Sean Kingston was investigated yesterday for sexual assault.

TMZ cites a law enforcement source, who claims that two women, ages 19 and 20, partied with the "Beautiful Girls" singer at the Crowne Plaza hotel in Seattle on Sunday, and left in an ambulance later that night. Details about the situation are vague at this point; a hotel manager has confirmed that "an incident" occurred at the hotel on Sunday night, but refused to give further explanation.

Both women were said to be intoxicated upon arrival at the hotel, bringing bottles of beer and vodka with them. One of the women claims to have had sex with Kingston, and, according to TMZ's source, "she was very aggressive."

When Kingston, 20, then left the party in favor of another room on the floor, the woman remained behind and allegedly had sex with two more men in the room, while her friend had sex with one.

At some point in the night, an ambulance was called, taking both women to a hospital to conduct rape tests. They were also tested for the date rape drug Rohypnol or "roofies" -- though TMZ referred to the drug erroneously as "Rufinol" -- but the results have not yet been reported.

Kingston was initially called in for questing by the police, who later decided that the women's claims were not credible and deemed an interview with the singer unnecessary. One or both of the women are said to be filing a civil suit.

Kingston is currently scheduled to perform with Justin Bieber tonight in Portland.