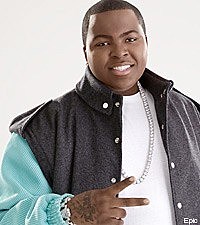 Reggae artist/rapper Sean Kingston hopes fans get him when he releases his sophomore effort, 'Tomorrow,' this summer. He said he liked his self-titled debut, but it "didn't connect to the fans."

"People loved Sean Kingston songs but they didn't know who Sean Kingston was as an artist," Kingston said during an interview with The BoomBox. "I feel like this album is so musical. You got every type of track. Everyone from young to old is going to be able to ride out to this album. A lot of people come back on these sophomore albums but they don't come back as hard as they do on their first album. I feel like this album is coming so, so hard because I've been away for a year and a half. I've been focused on my sophomore album because a sophomore album can make you or break you. I feel like the lyrics, the songs, the beat everything ... I feel like it is going to change my career when people hear the music on this album."

To hammer home his point, Kingston hired some of the best producers around, including Wyclef Jean, JR Rotem, RedOne, and Timbaland, for 'Tomorrow.'

"The first album, I feel like the production was good, but a lot of people didn't see my artist style," Kingston said. "JR did the whole first album. This time, I want to really go with a couple different producers so they can show my versatility."The first single from the album is the infectious 'Fire Burning,' a song that Kingston said defines summertime.

"Being that I'm coming out with my sophomore album, it's the summertime, I wanted to do something with a lot of energy, very club," said Kingston, who added he is tentatively scheduled to tour with Pink this summer. "I basically went in with a lot of producers looking for a big, huge club record. That's what's going on right now. I'm big on the computer. I like to read blogs and like to listen to radio and see what's working right now. I feel like the club is where it's at. I worked with a couple producers and the last producer I went with was RedOne. He did a lot of stuff with Lady GaGa. He came up with the record. He already had the beat in mind. He already had the idea of where he wanted to take the song. I came in and put the icing on the cake. It was crazy."

But whether or not 'Tomorrow' succeeds, Kingston is happy with his place in music.

Filed Under: 574869, Sean Kingston, SeanKingston
Categories: Reggae
Comments
Leave A Comment
Common Chases the Winning Formula with ‘Finding Forever': July 31 Hip-Hop History
Cardi B, Gucci Mane, Diddy and More Celebrate Easter on Social Media
Sean Kingston Says 9 People Jumped Him But ‘There Was No Beat Down’ [WATCH]
Man Jailed After Shots Fired During Migos and Sean Kingston Fight
Sean Kingston Denies Getting Beat Up by Migos: ‘Do It Look Like I Got Jumped?’ [VIDEO]
Sean Kingston Cuffed by Police Following Alleged Migos Fight [VIDEO]
Did Migos Really Jump Sean Kingston in Las Vegas Last Night?
The Game and Meek Mill Trade More Shots at Each Other on Instagram [PHOTO]
The Game Accused of Using a Ghostwriter for Meek Mill Diss ‘Pest Control’