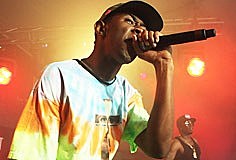 The Odd Future crew has been courted by multiple record label honchos -- including Bad Boy's Sean "Diddy" Combs and SRC's Steve Rifkind -- for their services, even leading the collective to spoof the meetings in a Funny or Die video. But, after months of hype, OFWGKTA have decided to "sign themselves," their management tells The BoomBox.

By opting for a distribution deal via RED, Odd Future will be able to retain total creative control of their music. The power move makes sense when considering the LA based crew has become a media darling by remaining steadfast in their anti-music establishment rhetoric and creating music on their own terms.

However, Odd Future has aligned with record labels, other than their own, before. Tyler, the Creator's sophomore album 'Goblin' will be released May 10 via XL Recordings, and MellowHype's 2010 mixtape 'BlackenedWhite' is getting re-mastered and released by Fat Possum Records this summer.

Following appearances at the 2011 SXSW music conference and Coachella music festival, Odd Future will perform in select U.S. cities this May and at this year's Pitchfork Music Festival in July.