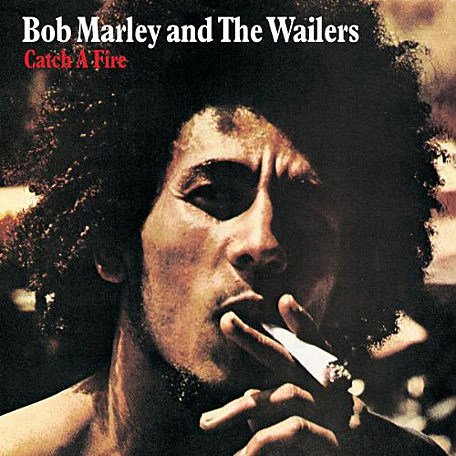 Bob Marley and the Wailers' classic album Catch A Fire turns 40 years old this week (April 13th to be exact). It is well-regarded as one of the first reggae albums to find an an international audience, largely viewed as one of the greatest albums of all time in any genre and ultimately the album that set Bob Marley up to become a star.

When it was foisted on the public in 1973 the Wailers had already released three studio LPs, a variety of singles and a 'best of' collection for various record companies. They'd signed with CBS Records and traveled to Europe to work with Johnny Nash on the soundtrack to a film entitled Want So Much To Believe.

But when financing for the film ran short, they found themselves stranded in the UK without the proper cash to return home. Bandmates Bob Marley, Bunny Wailer, and Peter Tosh had to figure something out.

Island Records founder Chris Blackwell was a fan of the group and had released a handful of Wailers songs in the UK. Connected through a mutual friend, Blackwell relished the opportunity to work with them in a larger capacity. He subsequently signed Bob Marley and the Wailers to Island Records, which was then still a relatively small indie label, not the giant we know it as today.

On the occasion of Catch a Fire's 40th anniversary, we spoke with Chris Blackwell -- largely credited as the man who 'discovered' Bob Marley -- about the making of the record. Read our EXCLUSIVE interview and see what he had to say. 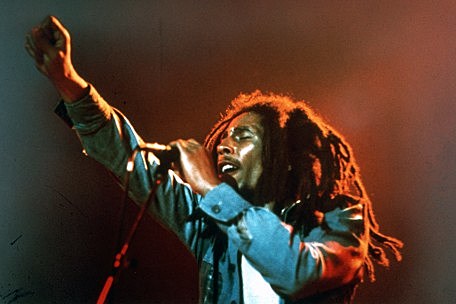 What is the story behind meeting Bob, Bunny, and Peter?

They were in town to do music for a film, but the film didn't receive its financing. So the person who had taken them over -- his name was Danny Sims -- hadn't gotten them a ticket back to Jamaica from London, so they were stranded there. He said, 'Well, I'd like you to meet with them.' And literally, this was ten days before Jimmy Cliff had decided to leave Island [Records] to go to another label. I was kind of devastated about that... When they came in, it was like the real life character from the movie, The Harder They Come. They weren't actors, they were real rebels trying to get a fair deal in a rotten system.

How did you become involved with making Catch A Fire?

I asked them if they were signed to anyone and they said they weren't. I suggested that the way I would like to present them would be as a black rock group. Bob was intrigued a little bit, but Peter and Bunny were less so. They were really trying to break into the American R&B market.

I told them that I didn't think they wouldn't be able to do that with their material and the sound of their records because at that time black America wasn't really interested in anything coming from the islands or Jamaica. The music was much more polished and smooth than reggae music. It didn't have all the social lyrics or the tracks like Sam Cooke or somebody of his ilk might have done –- so I felt that their best shot would be as a black rock group.

At that time, my record company was very strong in rock music in England. We had all of the credibility in the marketplace, with the consumers, and the retailers and club owners. So when we would sign an act, the stores would carry the records and the clubs would play the music because they trusted our taste. This is why I thought this would be the way go for them because reggae, Jamaican, and ska music didn't have any respect as music in Jamaica. It had quite a few hit singles, but it would be novelty type hits. There wasn't any real respect for musicianship there yet. 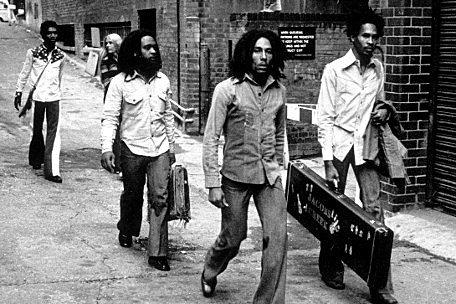 What was your relationship with the music?

I felt personally close to this music. I heard it all my life so I loved and respected the music and this band that I wanted them to morph into would be something I could really work with and expose them to a market, which had been opened up by the movie The Harder They Come. It gave context to all the music that was coming out of Jamaica. I asked them to go and make the record and when they made the record and I heard it, I thought it was fantastic.

The album changed a bit though.

I felt that in order to achieve what I wanted to achieve one needed to modify it a little by adding some solos in there because there weren't any solos in reggae during that time. I wanted to add some rock guitar and synthesizers to make it more palatable to a rock audience. The result was out of all the records that we put out of Bob, this one was the most smoothed out and I don't want that to sound negative because it was just making it more palatable to the audience I was going for. This album had the most modification to the original sound of it. And our records became rawer as they went on.

What direction were you trying to go with the album's sound? Was it a joint venture between you and Bob or a collaborative effort from everyone involved?

Bob recorded all the music. I overdubbed the records with Bob and then mixed them with Bob. When I say with Bob, Bob was around because I never messed with an artist's music. I have ideas and in certain cases -- some of the artists I've worked with -- I've never been in the studio or touched anything of theirs. But in other cases I've had ideas on how things should go and will suggest it and execute it and if they don't like it, I don't use it. But Bob I think was intrigued from spending the time in London and, you know, he got more of an understanding of what it was all about and supported it. 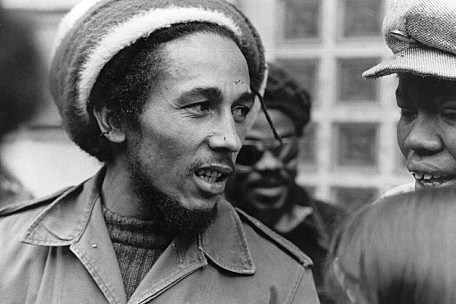 What was your relationship with the band during the making of the album?

I went out to Jamaica after the record was finished and told them I'd love to hear it. When I heard it, I was just blown away. I felt I could do some stuff to it to make it stand out. This is why I put a very special cover on it initially. The cover you see on it now isn't the initial cover. The initial cover had the title Catch a Fire and the cover looked like a Zippo lighter.

You said earlier when you were working with Bob that he was so open to ideas. What was the dynamic that existed between you and Bob as opposed to Bunny and Peter?

It was the first time you mixed a record together with Bob Marley. Can you describe the experience of it?

I was really doing the end production at that time and he was around. He wasn't in the studio mixing, but he was around. Whatever I was doing, I would check with him to see if he liked the sound of the records. We got on together very well. I wouldn't say we were best pals and hung out at night clubs and things of that nature. Our relationship was a working relationship. It was very straightforward. I can honestly say that we never had any misunderstandings or fall outs. He always kept his word and I always kept mine. 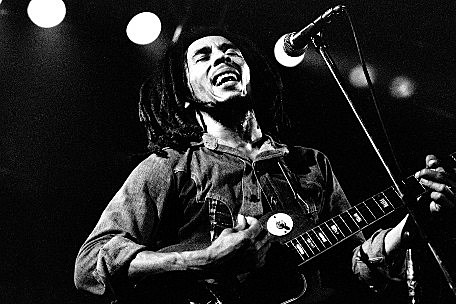 When you heard the album for the first time, what specifically blew you away about it?

I was blown away by the album after I heard the first single, "Concrete Jungle." I still get goose bumps when I listen to it today. I thought it was such an incredible, progressive song. Then the second one was "Slave Driver" and I just loved the groove of it. It was from "Slave Driver" that I got the idea for the title. "Slave driver the tables have turned, catch a fire and you're gonna get burned." I thought Catch A Fire was such a great title for a launching of a new movement. I liked "Midnight Ravers," "Kinky Reggae," "Stop That Train," and all the songs really.

Did you genuinely feel that the album was going to become as big as it did?

I thought for sure it would. But I remember ringing back six months after it came out to the office in England and I asked the guy, 'How is the album selling?' He said, 'It has sold 8,000.' And I said, '8,000. That's all it sold?' He said that was good for a reggae album because reggae albums didn't really sell albums. They pretty much sold only singles. I told him it wasn't just a reggae album; it was a movement.

During the time you work closely with Bob, can you delve into the genius of the man? Not many people had that opportunity.

He was very soft spoken. He would laugh a lot. He was a very relaxed person. He had that aura where he didn't have to shout or anything like that to get his point across. It was an understated power that he had. I don't know how else to describe it. He just had it. He was truly great. He was just natural. The only way I can tell you better is, on the road, he was always the first one on the bus. He always led by example. Most big acts the bus is waiting for the star to arrive and the star is a half an hour late while everyone has been waiting on the bus. They do it because they can do it. They're the leader of the group. They abuse their power. But Bob led by example always. 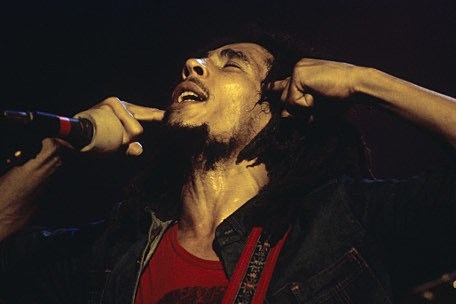 What went into getting people to know about this album?

It wasn't country music, jazz, rock, or folk. Reggae was its own genre. It didn't fit into any radio formats so the only way for them to make it would be on the road and playing to people who would go away and say what an incredible experience it was and talk about it and go and buy a record. It literally spread that way. It didn't spread from radio. Bob broke through due to his personal appearances.

What were some of the difficulties in getting these songs on the radio?

There wasn't a particular radio format for reggae music. So that was the problem. The first record we managed to get on radio was "Could You Be Loved." I'm not sure, but it might've been an earlier one with Frankie Crocker in New York. Frankie Crocker was the first person to play a Bob Marley record in America.

How do you feel about the impact the album has made on popular culture 40 years later?

I'm incredibly proud to have been a part of it. I consider myself very fortunate. He was stranded in England and came walking into my office. The only thing I ever did for him was to put him in the direction to find his audience. That was really it. I'm very proud of it. His records speak for themselves. Whenever I'm in Africa, it's amazing because Bob is so huge in Africa. I've literally been around Africa without ever showing a visa because of people knowing my relationship with him and having worked with him. He is such a God-like figure to them. It's amazing to see how every corner of the world and each race of people from Tibet, Nepal, India, Australia, and everywhere has been impacted by his music. It's just extraordinary.

Filed Under: Bob Marley, bob marley and the wailers, chris blackwell
Categories: R&B
Comments
Leave A Comment
Back To Top