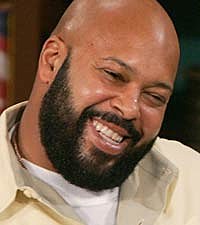 Suge Knight is currently a wanted man. Apparently, the Death Row founder failed to appear in court last week, facing charges of driving with a suspended license, and is now to be arrested on sight. [Fact]

Young Vito, the rapper accused of murdering Brick Squad affiliate Slim Dunkin, has been found not guilty of murder by an Atlanta jury. He was, however, convicted of aggravated assault and possession of a hand gun during the commission of a felony, and sentenced to 25 years. [AllHipHop]

The slackers over at Rap Genius have taken on the simple task of annotating the entire King James version of the Bible. Jesus. [RapGenius]

Here's a video of Jay-Z, Usher, Ludacris, Jeezy and several others performing at the So So Def reunion in Atlanta recently. Pretty cool. [HotSpotATL]