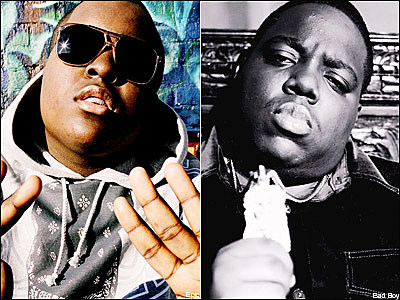 Sean Kingston has had quite a bit of recent success for a man of his tender age: The 17-year-old Jamaican-American R&B/reggae star not only has a huge summer hit with his No. 1 single 'Beautiful Girls,' he was also rumored to have been picked to portray the Notorious B.I.G. in an upcoming biopic about the slain rapper, titled 'Notorious.' Unfortunately, according to the movie's producers, stories claiming that Kingston will be filling Biggie Smalls' extra-large pinstriped suit are unfounded.

The producers of the film, who include executive producer Sean 'Diddy' Combs and Biggie's mother, Voletta Wallace, say that 'Notorious' will cover the brief, illustrious career of the rapper born Christopher Wallace, who was cut down in a hail of gunfire in 1997 at age 24, a crime that has yet to have been solved. In a statement, producer Wayne Barrow sets the record straight about the Kingston rumor, announcing that while the young star is one of several people being considered for the lead role, no decision has been made as of yet.