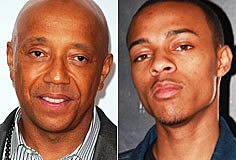 Following Bow Wow's recent confession that he fathered a daughter with ex-girlfriend Joie Chavis, hip-hop pioneer Russell Simmons took it upon himself to speak with the 24-year-old rapper-turned-actor about the impact his announcement has made on the lives of his fans and fellow artists.

Simmons, who engaged in his share of philandering before assuming his role as hip-hop's spiritual advisor, commended the young entertainer, on his website Global Grind, for making the announcement. He went as far to say Bow Wow's bravery has inspired and encouraged others in his situation.

"People are so touched by your recent comments that I got people tweeting me telling me that they are following you now and they love the way you've stood up," Russell told the former child star.

"Right. Even Tyrese, who's a good friend of mine, called me and was like, 'Man, you don't even know what you just did,'" Bow Wow responded. "He said, 'You just made my week because you're the first young African-American, you know you're the youngest one in the game right now with a kid, you have a chance to have every male your age and younger who has kids now... you can make them step up and become better men.' So when he told me that, I was like "WOW." I didn't even think about that and I never had my father in my life ever! So this just makes me want to step up and just go harder even more and give her everything my father never gave."

Shifting focus to the subject of Bow Wow's much-publicized admission that he had considered suicide, the Cash Money-signed rapper explained that achieving stardom at such a young age caused his adult depression.

"The suicide thoughts just really came because I think earlier I was exposed to so much, Uncle Russ, to the point to where I kinda felt like it ruined my adulthood," Bow Wow continued. "I just got so stressed out because I felt like I did everything too fast and it didn't leave me with nothing to look forward to..."

In response, Russell praised the young rapper for his growth, saying that many of his peers were unable to handle the pressures of fame, but that his decision to come forward about his daughter's birth is proof of his maturity.

"You have a child now and it brought something out of you; the idea of giving and taking care of somebody else," Russell said. "All of the celebrity and all of the experiences you have are good but they teach you to look inside to be a better giver. You're a celebrity and it's God's gift to you and you can give it to others because people gonna follow you and be better fathers because of you..."

Check out the rest of the interview here.