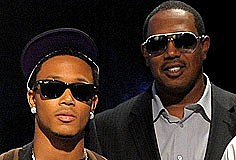 It's been 20 years since the launch of No Limit Records, and founder Master P is celebrating the milestone in style. The pioneer is teaming up with his son Romeo and flagship artist Silkk the Shocker for an all-star concert taking place Sunday (May 1) in Houston, Texas at the House of Blues.

The event, presented by No Limit Forever, The L.I.E. Group, Viranski and AARJ Worldwide, will feature performances from Silkk and Romeo, who now heads the digital shingle New No Limit. Artists from the imprint are set to take the stage including Ms. Chee, Ace High, Co-Ruff, Bengie B, Southdown, Kay-I, Propain, Dallas Blocker, Black Don & D, Gangsta, OakTree and more.

Additionally, the concert will be filmed for a video for the upcoming single 'Rock Wit It,' a cut off of the forthcoming New No Limit compilation 'Family Business.' Tickets are available for $45 from NoLimitForever.com.

No Limit Records, which has sold more than 75 million albums worldwide, established itself as one of the most successful hip-hop labels since its founding in 1990. The label's first release -- Master P's 'Get Away Clean' -- dropped in 1991, and its output steadily increased until hitting its stride in the late '90s. After filing for bankruptcy in 2003, Master P and Romeo regrouped with New No Limit in 2005, and have released more than a dozen albums since then.