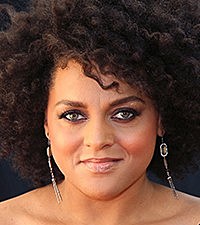 Marsha Ambrosius has released a controversial new video for "Fuck N Get It Over With" that has sparked a few rumors. Although many think this video was the former Floetry singer's way of telling the world that she's into chicks, she's setting the record straight through social media.

Apparently the scrutiny placed on sexual orientation, as portrayed in the video, had the "Far Away" songstress up in arms. She took to her Facebook page earlier today for a lengthy rant. Interestingly, she doesn't deny that she has had "sexually explicit dreams about women" but does claim she is "not a lesbian." Thanks for sharing, Marsha.

Possibly the specific detail with which Ambrosius details exactly where the pair hooked up should be the more controversial element of this song? The song is from the chanteuse's forthcoming Friends & Lovers EP -- not like that title raises any eyebrows either.

Watch the video below and see what the fuss is all about.