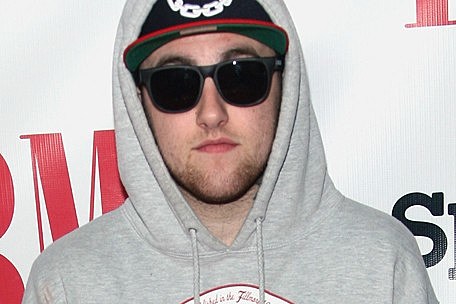 Having since moved out to California, where he's forged friendships with Los Angeles peers signed to Top Dawg Entertainment and the Odd Future collective, Mac has revealed that his forthcoming albums will be decidedly more collaborative. His EP with Pharrell Williams, Pink Slime, which he intends to release by the end of the year, is already 11 songs deep, and may feature surprising appearances by everyone from Styles P to Aussie indie pop singer Gotye.

"We got Curren$y on there. Pharrell obviously is on there, Styles P is on there, which is dope," Mac told The BoomBox, on the red carpet at the BMI Urban Music Awards on Friday (Sept 7). "We might get Gotye on there. I met him in Japan and he was a great guy. So he might get on the record."

Mac went on to describe Pink Slime's "festival" sound, which can be heard on leaked singles "Onaroll" and "Glow," both of which feature a deeper-voiced, vastly more mature MC than the happy-go-lucky (almost entirely) tattoo-free teen who gained exposure with his 2010 mixtape K.I.D.S.

"[Pharrell] dubbed it festival music," Mac revealed. "He wants me to have music that I can rock and people go nuts, and just lose their minds, 'cause I feel like there's so many different kinds of music. Especially with me, I like to dabble in a lot of different things.

"When I perform on the road, at shows, I call it anarchy, and I just tell the crowd that's what this song is, is anarchy."

In addition to his EP with Pharrell, his sophomore LP is also coming in early 2013. He told us the effort will feature several of his newfound West Coast co-conspirators.

"Earl, man, he's talented," he said of his feature with OFWGKTA enigma Earl Sweatshirt. "I kinda fucked him up though -- excuse my french -- because he came over to like fuck around with some shit, and made a beat and then I rapped on it, and he was like, 'Man I didn't really know you could rap like that.' So that's dope."

The rapper also went on to disclose a friend from the South will show up on the as-yet-untitled project.

"Gucci's on there, which is cool, because you know, Gucci, man," he continued, grinning at his own joke. "I'm trying to get a long array of different artists on there, because the first one was so solo that I want the next one to kinda show how I work with other people, and let other people bring their energy.

"Schoolboy Q is on there, and that's like my dude, yo. He's definitely a very close friend, as well as Ab-Soul, just the whole TDE movement. Soul will be at the crib and I'll be making a song, and he'll be like, 'Yo, let me just hum in the background on that hook, I think I got something. Don't even put my name on it.'"

Many miles from his native Pittsburgh, it sounds like Mac Miller is perfectly at home.