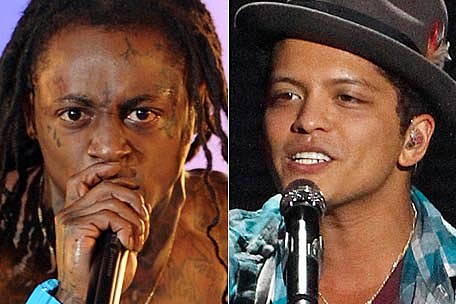 Lil Wayne turns inward in the video premiere of 'Mirror' featuring Bruno Mars. The visual opens with a tour of Weezy's tattoos, highlighting pieces like 'Fear God' on his eyelids and 'Life's a Gamble' on his shoulder.

But, like many rappers before him, Wayne's blasphemous symbolism may anger religious groups. With red paint on his hands -- representing blood -- the New Orleans native works on what appears to be a large scale, chaotic, Jackson Pollock-esque painting. Bruno Mars adds to the work with a chorus of "Mirror on the wall. Here we are again. Through my rise and fall, you've been my only friend." 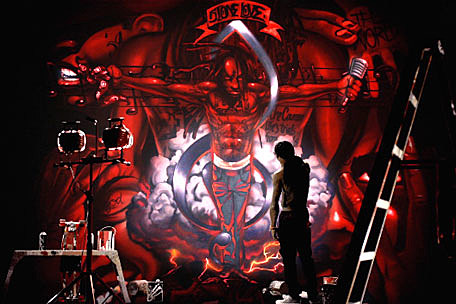 The painting and tattoos serve as Wayne's reflection while the lyrics delve into his past. After several allusions to Jesus, the viewer quickly realizes that the painting is not chaotic but a clear image of Weezy -- crucified on a treble-clef cross.

The "misunderstood" -- he has the word inked over his eye -- rapper flows with, "I see the change; I see the message. And no message coulda been any clearer, so I'm starting with the man in the..." crediting Micheal Jackson for teaching him to look within.