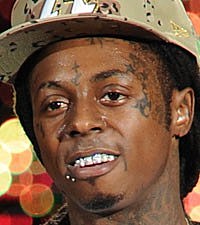 Lil Wayne's highly anticipated ninth studio album, 'Tha Carter IV,' will make its debut on August 29 and the tattooed rhymer is serving up some more tracks for his legion of fans.

The 28-year-old, known for showing up and showing out on his hip-hop peers' albums, tapped his Young Money signee Drake to appear on his newest single from the LP, 'She Will.' On the track, produced by T-Minus, Weezy spits verses about women, haters and living dangerously. "Life on the edge, I'm dangling my feet/ I tried to pay attention, but attention paid me/ Haters can't see me, nosebleed seats/ And today I went shopping and talk is still cheap," he raps.

Drake chimes in on the hook with, "She just started to pop it for a n---- and looked back and told me, 'Baby it's real/ And I say, 'I ain't doubt you for a second,' I squeeze and I could tell how it feel."

Though Rick Ross doesn't appear on the final version of the song, a remix recently made its way to the Internet, where the Maybach Music head honcho rhymes of his most talked about interests: stacks, ladies and pricey possessions. "Pandemonium she caused that/ Toss it up then I stuff 'em where her draws at/ That's on everything like feet that's on my floor mats/ Red bottoms, spikes on 'em that's dough stacks."