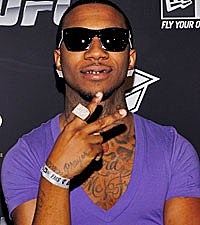 San Francisco rapper Lil B is set to take his swag movement on the road after inking a new tour deal with Live Nation.

According to SF Weekly, the Pack member has locked down a deal for four solo shows and two festival appearances, a notable achievement for an independent artist. The Based God's manager, Sebastian Demian explained that it was a milestone for the young rapper, who has achieved viral success and hopes to parlay the upcoming East Coast and Midwest dates into a larger tour series.

"It's for sure the first [Bay Area] show of this new era of people being aware of Lil B," Demian said. "We hope to take it all over the country and spread the message of based thinking. [He made] over 100 MySpace pages ... over 100 videos on YouTube last year. Now we'll do over 100 shows."

Demian also revealed that the 21-year-old rapper is in talks with several labels to secure an official record deal. In addition to the success of his web releases, he recently made a notable appearance on the cover of XXL's 2011 Freshman Class issue, and performed a standout set at SXSW where he was cheered on by Diddy and L.A. rap collective Odd Future.

Lil B dropped his most recent mixtape, 'Illusions Of Grandeur,' on March 11, and released a remix to the single 'What It Feel Like' featuring Twista earlier this week.