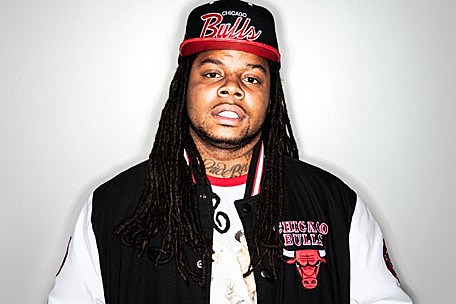 Chicago rapper King L is a weed enthusiast. He'd also like for the special lady in his life to share his passion for the sticky green. Listen to the chill vibes of his new single, "My Hoes They Do Drugs," featuring Juicy J and Pusha T, to find out what else women are getting into when he invites them out for some hang time. The song is just one chapter in the story the 24-year-old rapper tells on his debut LP, Dope & Shrimp, set to arrive in the coming months via Epic Records.

While fans await that project, his current mixtape, Showtime, is out for public consumption and he's already got another, Drilluminati, in the works. One track that could very well find its way on the latter, in addition to his forthcoming album, is "Feelin' Like a Million Bucks." The J.U.S.T.I.C.E. League-produced effort is similar to what one might hear from a certain Miami bawse.

"That's just one of my favorites due to the fact like, I listen to a lot of Rick Ross and that's who be doing a lot of his beats," he tells The BoomBox. "So I used to be thinking, 'I wish I had one of them beats.' I actually met [J.U.S.T.I.C.E. League] and they gave me quite a few beats. It's one of the best songs I recorded. It's some boss, playa music."

Hailing from a city riddled with crime, the tattooed "Val Venis" creator doesn't come off angry or violent. He's quick to laugh, crack a big smile, tell jokes and share personal stories of his come-up -- and love of seafood. Maybe all that smoke is good for the mind and body after all.

The BoomBox invites King L to give the people some insight on his life since he's a fresh face on the hip-hop scene. Read on as he reveals 10 things about himself -- his worst dating experience and bad weed blues included -- that his fans need to know.

1. His Royal Rap Name Comes With a Price

"It was like a mix-up, [the record label] couldn't get [King Louie] bought. It's still King Louie though. Now we getting to the bottom of it that we probably can use it. Once you get to know me and you my friend, you'll know that King Louie is what you really should call me. My name is Louis, my government name my mother gave me.

"My best friend Marquis, he's actually incarcerated now, but he gave me the name King Louie years back, when I was rapping years back."

2. First Album He Bought Is a 'Shocker'

"Silkk the Shocker, Made Man. I ain't even buy it honestly; my uncle bought it for me. I had a good report card. No Limit was my favorite label back then. That's what was rockin', poppin' back then. I liked the whole movement or whatever. It was a pretty dope album. I liked how the cover looked though, the real flamboyant covers.

"If you look at [the Made Man cover], one of [Silk's] legs look like they were skinnier than the other one."

3. Dating His 'Baby Mother' Held Him Back

"I just wasted like hella years of my life with my baby mother. That's my worst dating experience. I thought it was cool but everybody was telling me, 'No.' I got my daughter out of it so I like it 'cause of that. It was holding me back. As soon as I stopped messing with her I got my record deal.

"So I think I could've been got my deal if I hadn't been messing with her. That was the biggest mistake. It was like six years."

"Just like stupidity. Just stupid stuff. It's cool if you act silly but stupid people just irk me. I don't know what it may be, but if you ask a person, 'How could you be so stupid?' It just irks me. People who make stupid decisions. And bad weed. I smoke a lot of good weed."

5. Weed-Centered Movies Are His Favorite

"'Friday.' Shout out Ice Cube. I remember back when I was a shorty my uncles and them used to be in the basement getting high, smoking weed. I'd be upstairs eating crackers with like, you know you cut the bologna up and put it on the crackers. I'd just be watching 'Friday.' I was a kid back then so I just remember watching it over and over. That's my all-time favorite movie though."

6. A Former Rapper Gives Him Advice

"My brother, Doe. CEO Doe, Big Homie Doe. Before I was rapping, he used to be rapping. We was in high school, I didn't used to tell people I knew how to rap or whatever; I was kinda shy. I'm still kinda shy. Back then he was the rapper. Everybody in school knew he rapped and all that. I seen him come up. Then I started putting my stuff together. He just used to give me advice all the time.

"I was trying to get to where he was at. Now he just help me out with my stuff going on. He ain't never steered me wrong. He always keep it 100 with me."

"Well I told y'all I like marijauna, that's called dope. Shrimp, that's one of my favorites. I was actually supposed to release that as one of my mixtapes. The summer that I was supposed to release [Dope & Shrimp] -- I ain't have no record deal back then -- all I did was hustle, smoke dope and eat shrimp all the time at Lawrence's [in Chicago]. That's why I named my mixtape that. Now it's gonna be an album.

"All my mixtapes [and albums], I try to name them after something that gotta do with me. When I go do a project, I go into the project for that."

8. His Fans Come in All Forms

"It kinda tripped me out 'cause when we were on our way [to an event in Chicago], there was a guy, he was a lawyer. He was a white guy. He was in a trenchcoat and he looked like a federal agent or some shit. We was walking to the [pizza shop] and hes like, 'King Louie!' I told you like before the rap stuff we used to be hustling and all that.

9. A Rap Career Was an Afterthought

"I ain't always think I was gonna be a rapper. I just wanted to have money no matter what I had to do. Just to feed me and my family. Rapping is just something I used to do. Then I met Larry and [manager] John Monopoly [of Lawless Inc. record label].

10. Success Is a Priority