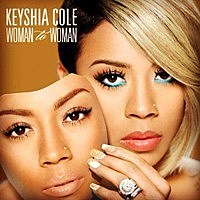 Her Woman to Woman album cover may have startled us a bit, but Keyshia Cole's tracklisting for the effort doesn't disappoint. The LP features 12 tracks with collaborations from five special guests.

Crooner Robin Thicke shows up for Cole's fifth studio effort on "Next Move" while Maybach Music Group's Meek Mill delivers his rhymes on "Zero." Earlier this year, Ashanti revealed that she had worked with Keyshia Cole on the song "Woman to Woman," though she wasn't sure if the track would appear on the completed album. Luckily, the title track featuring both ladies does indeed show up on the tracklisting. Elijah Blake ("Wonderland") and Lil Wayne ("Enough of No Love") also lend their talents to the LP.

Woman to Woman, the follow-up to Cole's 2010's Calling All Hearts, arrives Nov. 19. The album is available for pre-order via iTunes Nov. 2.