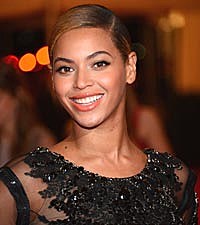 Beyonce's guide to dominance in the pool hall: talk copious amounts of smack and make sure to do a victory dance. Watch the video, pretty real. [NecoleBitchie]

Looks like Whitney Houston's family had a run-in with Ray J at the Billboard Awards Sunday night (May 20), where the family attempted to have the late singer's rumored flame forcibly removed from their area. Weird. [RapFix]

DJ Khaled has an important new video for "Take it to the Head," featuring Chris Brown, Rick Ross, Nicki Minaj and Lil Wayne. "I told [director] Colin [Tilley] when I called him, 'We gotta video, we gotta do the best video, we gotta win awards, and you gotta really take it there because we got nothin' but megastars on one record," Khaled told MTV. Sounds like an easy guy to work with. [MTV]

Houston rapper Kirko Bangz revealed details about his upcoming album and his next single in an interview with Columbus, Ohio's Power 107.5. Check it out. [MyColumbusPower]

Frank Ocean debuted a new song, which he shot himself singing "at home fuckin around, no judging." [FrankOcean]