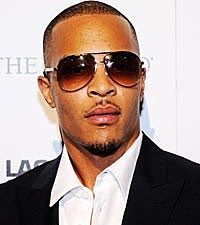 A security guard is suing Universal Music Publishing Group and a variety of other parties for "alleged labor violations, including a hostile work environment," by which she means T.I. and his entourage smoked too much weed in the UMG offices. Tough life. [Spin]

J. Cole has high hopes for his forthcoming Born Sinner LP. "I'm trying to compete with the white people," he revealed in a radio interview. [Hot937]

Out magazine has named Frank Ocean the most influential gay musician in the world. "After coming out last year as bi-sexual in an open letter released via blog post, he certified himself as one of the most important creatives making music today with the stunning, critically acclaimed Channel Orange," the articile explains. Nice. [Out]

Apparently LA's legendary hip-hop station KDAY has been sold for $19.5 million, and will now be a Chinese language station. KDAY broke Dr. Dre, N.W.A. and many other LA staples. Wow. Not even sure what to say. [RapFix]