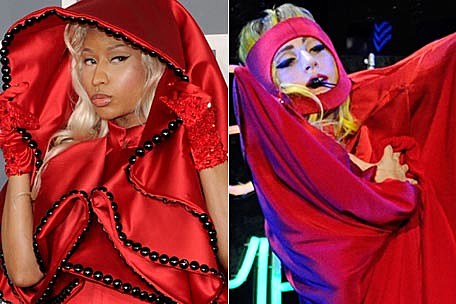 As AOL Music reports, much to her dismay, eccentric MC Nicki Minaj often finds herself on the opposite end of comparisons to pop star Lady Gaga. The two 20-something stars are both at the top of their respective genres, but since she came onto the scene, Minaj has been likened to Gaga by critics due to their shared love of outrageous red-carpet fashions, wacky stage costumes, and elaborate live shows.

Despite her increasingly pop-leaning sound, the Pink Friday: Roman Reloaded creator is not too happy with the categorization, telling "Nightline," it "offends me, no. Irks me, yes." The rant continued, "We are in completely different lanes. First of all, I'm a rapper. I'm from southside Jamaica, Queens." In contrast, Gaga was raised in Manhattan's affluent Upper West Side.

Minaj was quick to clarify that she means no disrespect by refuting the comparisons. "Gaga's a fantastic artist, you know, she paved her way. She's opened her own lane," Nicki acknowledged. "But I think that I have my own lane, and we never cross. Ever. So, you know, I really don't get the comparison anymore. Our music doesn't sound the same. Our stage presence is not the same. I just can't see the similarities."

Also in the interview, she discussed the abuse her mother Nina experienced by the hands of her father Omar. "I wanted to kill him," the Young Money rhymer shared. "I used to wish he was dead... We were afraid for my mother's life because whenever he would have a real bad outburst he would threaten to kill her."

The rap star's parents, who moved her family from Trinidad to Queens, N.Y., when she was 5 years old, are still in a relationship today. However, witnessing her father's violent actions towards her mother has left Minaj with a confrontational attitude towards men.

"You know, when you see your mother going through that you think, 'I'll never do that when I get older,'" Minaj admitted. "I always put my foot down with men. I let them know, 'I'm not going to submit to you.'"