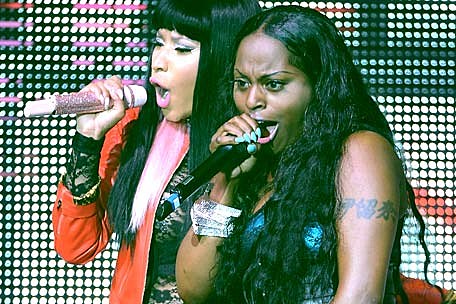 Nicki Minaj transformed from a pop queen to mixtape virtuoso at Roseland Ballroom in New York City Tuesday night (Aug. 14) as she performed for Pepsi's Live for Now concert. The Young Money rapper's show served as the finale for the first leg of her Pink Friday world tour and she certainly saved the best for last.

During her two-hour set, Minaj welcomed some of rap's prolific MCs to share the stage with her, sending the crowd into screams of pure delight. Cam'ron, Foxy Brown, Drake and Lil Wayne all supported their hip-hop sister while she moved through their respective collaborations and songs off the Beam Me Up Scotty mixtape, her debut album, Pink Friday, and her sophomore opus, Pink Friday: Roman Reloaded.

For first-timers at a Nicki Minaj concert, there was definitely a lot to take in. Expletives, shirtless skaters (hi, Weezy), male-bashing, threats, fog guns, sexual chemistry, pompous chit chat, rap history and lyrical intensity all played a part in the spectacle. She's come a long way from "rapping with a Baby Phat purse when you first saw me." To mark the occasion, here's 10 lessons The BoomBox learned from the 29-year-old Queens, N.Y., native's live show experience.

1. Nicki Is Rap's Quintessential Barbie
Yes, this may be obvious to some, but the Barbie name plate she's sported or explanations she gives in interviews add little to the doll image she portrays until her live show is witnessed. Her raps are performed onstage in a pink dollhouse (a curtain does the job in this case), where she gets to dance around in decorated rooms (changing sets here), frolic with various Kens (her dancers) and change into a myriad of glitzy outfits.

2. There's No Watching Her Tongue at an All-Ages Event
Youngins were in the house to see the "Shitted on Em" rhymer, some looking the tender age of 12. With song titles like the aforementioned, Nicki gave the kids in the venue a new way to say they're accomplishing their goals, if they didn't already have it in their vocabulary before. Then there's the wealth of descriptive lyrics about male and female body parts; those below the age of 18 were definitely given a crash course in the birds and the bees.

3. Foxy Brown Can Rock a Stage
The Ill Na Na creator showcased the '90s flavor that made her a respected name. On Tuesday night, she certainly delivered alongside Nicki. When the Queens rhymer brought Foxy out, she was energetic and, though she lost her breath a few times, proved to be resilient as she rapped through her lauded tracks "Tables Will Turn" and "Oh Yeah."

4. The Crowd Supports Her 'Ratchetness'
Pop-flavored tracks like "Starships" are what most know the head Barb for churning out. After all, they're her more family-friendly fare. However, she still eats competitors lyrically on other tracks, like Birdman's "Born Stunna" remix. More than three times during her show, she echoed this line off that song, "I show you bitches how to put together punchlines/ It ain't working out, it ain't crunchtime." She also prefaced it by informing her fans that fellow rhymers are consistently "jackin'" her signature style. "Y'all bringing out the ratchetness in me," Nicki said with a laugh. "I'm a good girl. I'm a pop star."

5. Lil Wayne Won't Let His Past Haunt Him Any Longer
The Young Money head honcho went on record in 2011, saying he would never perform in the Big Apple again, unless he was given "U2 money." This statement came as a result of serving an eight-month jail sentence for gun possession, stemming from an incident at a 2007 New York City concert. Glad he decided to rap a different tune at Roseland and support Nicki by performing "The Motto" and "Take It to the Head." Welcome back to New York City, Weezy.

6. Beating a Man With a Bat Crosses Her Mind
Don't mess with Nicki Minaj. Or you know, she could beat your head in with a baseball bat. If a lover crosses her -- let's say cheating is the crime -- she admittedly said she's thought about using a bat to get her point across. "This is known as the male-bashing part of the show," she announced before she served up the bitter ode "Fire Burns."

7. Drake Turns Her Barbz Into 'Hoes'
There's no denying that Drake and Nicki Minaj have chemistry. During countless performances together, they flirt, exchange seductive glances and even admit to getting jealous of one another. "You be turning my Barbz into hoes sometimes," the "Pound the Alarm" creator told the Toronto native when he popped out for her set to deliver their joint works "Make Me Proud" and "Up All Night." He laughed off her accusations and left the crowd with this lasting note: "I just had to be on the plane to support the queen." He wasn't talking about Lil' Kim.

8. She'll Kick Out 'Observers'
The ferocious MC, known for having a bold attitude, stopped her concert to address one thing that caught her eye: people in the audience looking bored. She wasn't playing around when she threatened to remove concertgoers standing in the last row. "I don't want people observing me," she barked. "Once upon a time there was a girl named Nicki who kicked people out of the concert."

9. Songs Are Written Faster Than Watching a 'Breaking Bad' Episode
"Save Me," a song produced by Pop and Oak and featured on her debut LP, is a very personal gem for Nicki. Inspired by a relationship with an ex-boyfriend -- she was at fault this time -- Nicki created the lyrics while in the shower and subsequently wrote the entire song in 30 minutes. Touted as the "realest shit" she wrote on the first album, the tattooed MC admitted she lost her guy because she didn't appreciate him.

10. Someone Believes She Sucks on Helium
Nicki Minaj fans come in all shapes and sizes. However, one woman in attendance at the Pepsi show didn't appear to be too familiar with the wig-wearing lyricist or the many characters she adopts in her rhymes. "Is she sucking helium?" the random concertgoer asked a prepubescent boy seated beside her once Nicki used a high-pitched tone. Obviously, she wasn't a member of the "Beez in the Trap" performer's legion of Barbz.