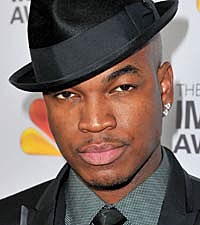 At this point, Ne-Yo can write a hit single with his eye closed, so it makes sense he challenges himself with other endeavors. The singer-songwriter has launched his very own alcoholic beverage, Malibu Red. The liquor, which is a joint venture with the Malibu brand, is a 70-proof mixture of coconut rum and silver tequila.

Billed by Ne-Yo as a "party in a bottle," the 33-year-old has been drinking the mixture long before the idea became a brand. "Me and my team, we been drinking it for a little while," he tells The BoomBox, of the product, which hits stores this month. "We took it over to the people [at] Malibu. They allowed me to be chief creative officer of the whole situation."

In addition to the music and beverages, 2012 will also mark the expansion of his Francis Alargo hat line, which is currently sold at Saks 5th Ave.

"I decided to do hats first," he explains. "That's what I'm most well known for. It was gonna be hats or suits. I been wearing hats my whole life. I was the one kid who was allowed to wear hats in school. We're about to move into flat caps, beanies and skullies. We originally started with fedoras and then later on we're gonna [expand]."

Although hats are the main focus of Francis Alargo, he doesn't rule out following in the clothing footsteps of Kanye West, Jay-Z or Diddy, among others. But being that so many celebrities have chosen the designer route, he'll make the official leap once he can stand out from the pack.

"It's very, very possible," Ne-Yo admits. "I just gotta figure out what's gonna make Francis Alargo be separate from other designers out there."

Hats and liquor are the focus now but so is his forthcoming album, 'The Cracks in Mr. Perfect.' Ne-Yo revealed that the first single off the project is 'Don't Make 'Em Like You No More,' produced by Harmony. Stargate and No I.D. also create beats for the LP.