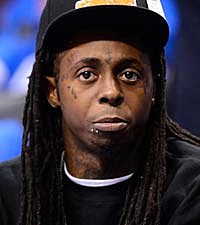 Still, that doesn't address whether or not Weezy slept with Chris Bosh's wife. A claim the rapper dubiously made while on stage at a Beats Audio event over the weekend.

Wayne was reportedly booted from a Miami Heat game last week after making a gun gesture towards a fan, but reps from the team contend that the rapper left the game of his own volition.

This is all very interesting considering that Wayne -- along with Eminem, Drake and Kanye West -- appeared on "Forever," a posse cut from James' 2009 documentary More Than A Game.

Following that, however, Wayne felt slighted when James and Dwyane Wade ignored him at Heat home games. Then they squashed their beef... or something. And now they're at it again.