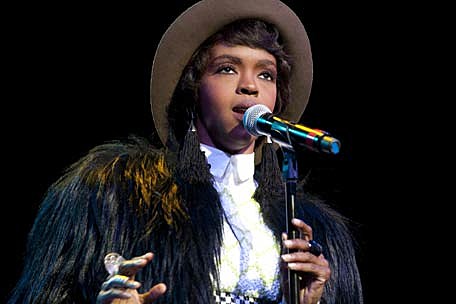 Lauryn Hill, one of hip-hop's greatest vocalists, turns 37 today (May 26).

Hill's musical career began in the early '90's, when she was recruited to join the Fugees by Prakazrel "Pras" Michel and his cousin, Wyclef Jean. As an MC, Hill's talents were formidable -- she was a natural rapper with a smooth, effortless flow and sharp lyrical skills.

It was on the Fugees' multi-platinum, Grammy-winning second (and final) release The Score, however, that Hill revealed her astounding singing voice, on her chart-topping, poignant cover of Roberta Flack's "Killing Me Softly."

Hill went into a self-imposed exile after releasing her wildly popular solo debut, The Miseducation of Lauryn Hill, and her poorly received MTV Unplugged No. 2.0 follow-up in 2002, firing her management, making controversial remarks and disappearing from public view for several years, amongst allegations that she had fallen under the control of a "cult leader."

The Fugees reunited in 2004, to perform at Dave Chappelle's Block Party in Brooklyn, N.Y., followed by a short-lived reunion tour. Though her record label, Sony Records, claims that Hill has several albums worth of unreleased material, recorded over the better part of the last decade, she has yet to release a new album.

The BoomBox marks Hill's 37th birthday by presenting 12 facts about the insanely talented, erratic "Ex-Factor" singer, whose career has, thus far, provides moments of incredible beauty, followed by a decade of question marks.

1. Hill became the first woman to receive 10 Grammy nominations, and the first to take home five awards, including Best New Artist, at the 41st Grammy Awards in 1999.

2. Hill attended nearly a full year at the prestigious Columbia University in 1993, before dropping out to pursue her musical career.

3. The Miseducation of Lauryn Hill was rumored to feature production by the RZA. While the collaboration never materialized, instead Hill sampled Wu-Tang's "Can It Be All So Simple" and Raekwon's "Ice Cream."

4. In 1998, Hill wrote and produced the song "A Rose Is Still a Rose" for soul legend Aretha Franklin, and directed the song's music video. Lauryn also wrote for Whitney Houston.

5. Hill's song "I Used to Love Him" is about her difficult breakup with Wyclef.

6. In 1988, Hill appearead as a contestant on "Showtime at the Apollo," singing a cover of Smokey Robinson's "Who's Lovin' You?" She was initially booed, but ultimately received a positive response.

8. The Miseducation of Lauryn Hill was the first album to receive a XXL rating by XXL magazine.

9. Hill appeared on the soap opera "As the World Turns" as Kira Johnson in 1991, showcasing her strong singing voice, and went on to act in several feature films, including Sister Act 2, opposite Whoopi Goldberg.

10. Hill's debut LP featured contributions by D'Angelo, Mary J. Blige and Carlos Santana, as well as another singer, who wouldn't take his place in the spotlight for several more years, John Legend, who played piano on "Everything Is Everything."

11. Wyclef Jean initially did not support Lauryn's solo career, although he eventually came around, offering her production assistance, which she declined.

12. In 2003, Hill shocked the world by accusing the Catholic Church of "corruption, exploitation and abuses," while reading a prepared statement at a Christmas benefit concert at the Vatican, in front of a crowd of 7,500.