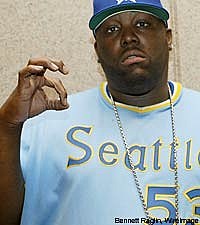 "I wanted to do it fora a long time," Mike said. "I read all the comments on AllHipHop and all the other sites. And I love how smart the hip-hop fans are and they say 'Man, this guy is dope. Why he so slept on.' Then, it always be a comment under there that be like 'I don't suppose the name Killer Mike be holding him back? You can't get corporate

sponsorship with that.' (laughs)."

Mike made his debut on OutKast's 'Snappin' and Trappin'' from their 2000 album 'Stankonia,' and appeared on their Grammy-winning hit, 'The Whole World,' in 2002. Though he and Big Boi publicly feuded when Mike left Purple Ribbon, the two have since reconciled.

His latest album 'Underground Atlanta' was released on Aug. 31.