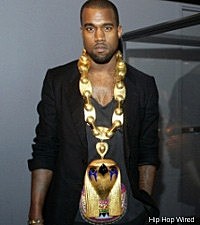 Kanye West made a visit of Egyptian proportions recently stopping off at the coffin of King Tut's great-grandmother wearing enough gold to make the queen herself turn over in her grave.

West popped up at the Discovery Times Square Exposition in New York City to view the Tutankhamun and the Golden Age of the Pharaohs exhibit, wearing a humongous gold pendant of the Egyptian God Horus. A possible ode to the Egyptian dynasty? Despite being dead for thousands of years, King Tut still manages to rack up some hefty frequent flyer miles. The exhibit made its way back to New York after 30 years abroad. Comprised of 10 galleries and 130 artifacts, New York will experience the world of the pharaohs including the young king's golden canopic coffinette and the crown found on his head when the tomb was discovered.

Yeezy first debuted the estimated $300,000 Horus chain, from Jacob & Co., during his performance at this year's BET Awards. After spending months outside of the spotlight it looks like West is no longer camera shy and ready to partake on what we hope will be a full-fledged media blitz leading up to the release of his album 'Good Ass Job' in September. The 33-year-old has been away recording the record for the past several months, and released the lead single 'Power' last month.