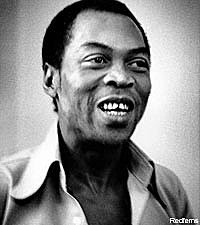 Jay-Z and Will Smith are exhibiting their passion for the arts with generous sponsorship for the production of an upcoming $11 million Broadway musical titled 'Fela,' which documents the life of Nigerian activist and performer Fela Anikulapo Kuti. The play, which officially debuts on Nov. 23, will include Kuti's personal music, as well as other African, jazz and funk influences.

Fela Kuti has been celebrated for his musical influence in Africa, most notably for spearheading the introduction of afro-beat music to the mainstream. He was also a well-known human rights activist, heavily influenced by the American Black Power movement, and eventually served jail time for his activism before his 1997 death from the HIV virus.

An original version of the two-hour biographical play debuted off-Broadway in September 2008 to rave reviews, but production on the new musical was temporarily halted because of financial troubles. The new and improved version of the play will be directed by Tony Award-winner Bill T. Jones and will feature actor Sahr Ngaujah, who won praise for his role in the original adaptation. Though there have been mumblings that Jay-Z and Will Smith may step in as producers, there has only been confirmation that financial support from the two stars has kept production in motion.

Previews of 'Fela' will begin on Oct. 19 at the Eugene O'Neill Theater in New York and the show will run through April 4.

Filed Under: Jay-Z, Will Smith, WillSmith
Categories: Hip-Hop
Comments
Leave A Comment
Back To Top