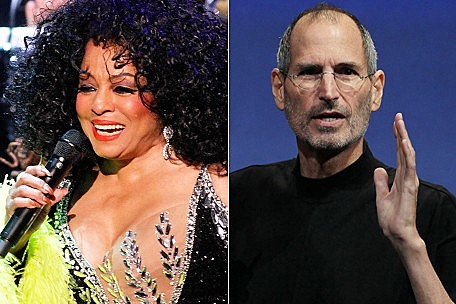 Legendary singer Diana Ross, hip-hop forefather Gil Scott-Heron and Apple founder Steve Jobs will be among those honored at the 54th Annual Grammy Awards on Feb. 12.

Ross, who was a member of Motown group The Supremes until she went solo in the '70s, has received 12 Grammy nominations throughout her career -- though she has never won -- and will be honored with the Grammy Lifetime Achievement Award, along with The Memphis Horns and 'The Revolution Will Not Be Televised' poet-singer Gil Scott-Heron, who passed away in May.

Jobs, whose life was cut short in October, after a quiet battle with pancreatic cancer, will also be posthumously recognized with a special award for his tremendous contributions to the music industry, as per an announcement made by the Recording Academy yesterday (Dec. 21). According to the Metro U.K., he is one of the first non-performers to receive such an award.

"This year's honorees offer a variety of brilliance, contributions and lasting impressions on our culture," explained Recording Academy President and CEO Neil Portnow. "It is an honor to recognize such a diverse group of individuals whose talents and achievements have had an indelible impact on our industry."

The honorees will receive their awards at a special ceremony on Feb. 11, 2012, during Grammy Week, and will also receive mention during the 2012 Grammy Awards telecast on Feb. 12, 2012, which airs live from the Staples Center in Los Angeles at 8PM EST.