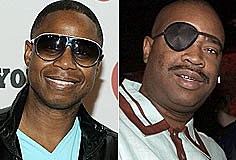 MC Ricky D and The Human Beat Box are back. Slick Rick and Doug E. Fresh will reunite next week at a concert titled 'The Show,' a nod to their classic hip-hop collaboration, in the Bronx, New York. Hosted by Roxanne Shante, 'The Show' will feature performances from Big Daddy Kane, Grand Puba, Positive K., MC Shan, The Force MD's, Cutman LG and more, bringing some old school flavor to Bronx venue The Paradise Theater.

Slick Rick, who recently performed during Old School Night in Brooklyn with Salt-N-Pepa and Naughty By Nature, first made his mark on the industry with Doug E. Fresh as a member of the beatboxer's Get Fresh Crew. With Fresh, Slick Rick dropped 'La Di Da Di' and 'The Show,' two singles that are widely considered to be hip-hop classics.

"It's going to be great to be back on stage with Big Daddy Kane," Positive K. told AllHipHop.com. "It is great that Pay Up is doing its thing with Spinback Entertainment, bringing the real classic hip-hop to the Mecca of hip-hop, the Bronx.'

"If it was not for the Bronx, this hip-hop game would not be here so we are honored to grace the stage in the Bronx," added Force MD's Stevie D. "Just show up and you will see."

As a solo performer, Slick Rick released the heralded albums 'The Great Adventures of Slick Rick' and 'The Ruler's Back.' Doug E. Fresh released several solo albums in the '90s, putting out his final solo album 'Alright' in 1996.