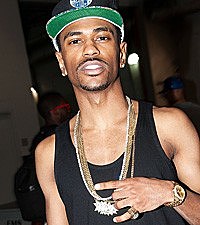 The two-day shoot took place in New York City on July 5 and 6, a week after the release of Big Sean's long-awaited debut, 'Finally Famous,' which dropped on June 28, landing at No. 3 on the Billboard charts.

"It's great, it's fun, me and Hype are homeys. He's a real dude and it's tight being around people that you consider legends, and him just being so real," the Detroit MC told MTV. "We came up in here and was just blasting DMX and all this different music. He gets inspired creatively from I don't know what, he just has these crazy ideas."

While not much is known about the concept, Big Sean revealed that Kanye inspired the video's look, which he called "visually eye-popping."

Big Sean is currently an supporting act on Wiz Khalifa's Rolling Papers World tour, which runs through August. His G.O.O.D. debut, 'Finally Famous,' which has spawned singles like 'My Last' featuring Chris Brown and 'I Do It,' is in stores now.