Everyone can let out a sigh of relief; Rick Ross isn't the only curvaceous body gracing the cover of Vibe's June/July Sexy issue. While a shirtless Ross valiantly tries to redefine modern day sexy, the folks over at Vibe also stuck to the traditional concept of the word and tapped hip-hop's hottest arm candy for their double cover issue: Amber Rose.

Rose came up from the slim shadows of the stripper pole in her native Philly to rap music video sets before grabbing headlines as West's girlfriend in 2009. After almost two years together, that included her sticking by the 'All of the Lights' singer through his infamous Taylorgate incident, Rose and West broke up, but not long before she found herself ironically in the arms of hip-hop's new sensation, Wiz Khalifa.

While Rose's rise to celebrity has been met with skepticism, as someone just looking to grab a headline, the public's fascination with the 27-year-old's hot, buxom body and rags to the hip-hop high life story is a clear signal that she won't be disappearing anytime soon. 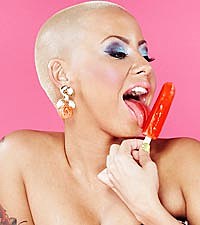 In her Vibe story, Rose takes what she calls the "high road" once more when it comes to talking about her relationship with West. "Kanye would always tell me how beautiful I was and that I was going to be iconic," she tells Vibe. "He always said that, 'Baby, you are iconic. You don't understand what you have. I didn't. I didn't understand it."

She tells Vibe that post-Kanye she hooked up with Kim Kardashian's ex Reggie Bush, and admitted that she and the football player were "both each other's rebound," before she fell in love with Khalifa. Now, seemingly in grasp with what she has, the model and novice eyewear designer refuses to fade away. "Am I supposed to go back to the strip club and not take these opportunities that I have?" she asks.

While her blonde buzz cut is enough to make her standout in celebrity circles, Rose also says she didn't always have it easy.

"I don't have rich parents and it's a struggle," she says. "I can't just call my dad and be like, 'Dad, my money is a little messed up. Can you buy me a car or a house? It's not like that for me. I feel like more people will relate to my story than the Kardashians or the Hiltons."

To read more from Rose's Vibe cover story, head over to Vibe.com or pick up their sexy issue on newsstands next week.