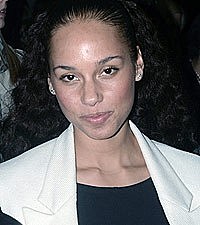 Alicia Keys' most recent release was the song 'Speechless,' a Swizz Beatz-produced track where the R&B songstress waxed poetic about her newborn son. Now, her longtime producer Kerry "Krucial" Brothers confirms that Keys is at work on a new album, which will hit stores later this year.

At the ASCAP Grammy Brunch last weekend, Krucial told Rap-Up that he has been in the studio with the singer recording new material for her fifth solo album. "We do got a release coming this year, but I can't speak on it yet," he said, declining to give any specifics. "Last week we was in the studio working on stuff," he continued, explaining how the process was different this time around. "The writing is the same. The only thing changed is the schedule. We leave earlier now. No more to-the-crack-of-dawn stuff -- at least not for now."

Keys' 2009 album 'The Element of Freedom' debuted at No. 2 on the Billboard 200 chart, racking up 417,000 in sales during its first week in stores. In recent weeks, the 'Empire State of Mind' singer has been spotted out and about with husband Swizz Beatz, including courtside at a Knicks game in New York City.