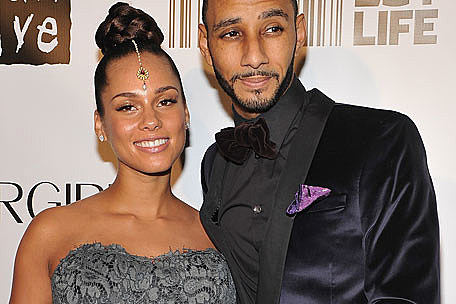 Alicia Keys and Swizz Beatz welcomed a baby boy, named Egypt Dauode Dean, at New York City's St. Luke's Roosevelt Hospital late Thursday (October 14). Although the couple have yet to release an official statement, Swizzy expressed his happiness via Twitter. "I'm so thankful for everything I been blessed with in my life wowwwwww," he wrote.

Both Keys and Swizz are known for keeping mum about their relationship, which began not long after the 32-year-old producer separated from former wife, Mashonda. Apparently unhappy with her ex's new girlfriend, Mashonda threw out more than a few jabs at Keys accusing her of breaking up the marriage.

Swizz and Keys got together back in 2008, and announced their pregnancy and impending nuptials earlier this year. They later tied the knot in an intimate ceremony on the Mediterranean in August. This is the first child for Keys, 29, and the third for Swizz, who shares a son with Mashonda, and two other children from previous relationships.