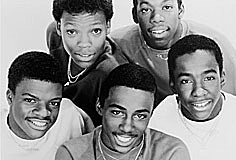 Bobby Brown is hot on the comeback trail with the January release of his fifth studio album 'The Masterpiece,' but he's got another big project on the way. The 42-year-old crooner has revealed that his group New Edition has reunited and that they will be working on a new album in the near future. Additionally, they plan on taking the show on the road with an upcoming tour.

The R&B singer broke the news while paying a visit to the ladies of 'The View.' "The good news I want to announce is New Edition has gotten back together," he said. "Also, we will be doing an album some time in the near future and a big tour, so y'all look forward to that."

Brown initially formed the group in Boston with Michael Bivins in 1978, adding members Ronnie DeVoe, Ralph Tresvant and Ricky Bell to the lineup. The group hit its stride in 1984 with the release of its self-titled sophomore album, which later went double platinum. Brown left the group in 1986 after the rest of the band members voted him out due to his crazy behavior.

As a solo performer, he found success with his smash 1988 release 'Don't Be Cruel,' which went seven times platinum, and its 1992 follow-up 'Bobby,' which went two times platinum. He most recently toured with Johnny Gill and Tresvant under the group name Heads of State.