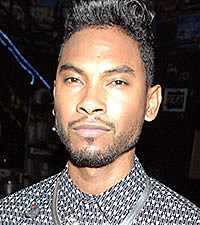 Miguel performed his illustrious R&B track "Adorn" on "The Ellen DeGeneres Show" and the audience collectively swooned. [Consequence of Sound]

The Rickey Smiley Show has the highlights and lowlights from the 2012 Soul Train Awards. [Rickey Smiley]

Production has begun on a made-for-tv movie about TLC, one of the highest selling girl groups of all time. [Singersroom]

Jailed rapper C-Murder has his request for appeal tabled -- he was convicted in 2009 of murder under questionable circumstances but will have to wait for the Supreme Court to address his appeal. [AllHipHop]

Who was in the wrong in the brawl between Halle Berry's fiancee Olivier Martinez and her baby daddy Gabriel Aubry? [Rickey Smiley]

Alabama rapper Rich Boy prepares his new mixtape "Back 2 Class" which will debut on AllHipHop.com when it is released. [AllHipHop]