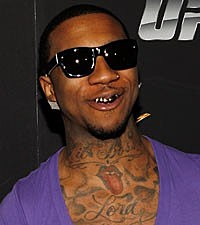 Last October, Lil B jokingly threatened to rape Kanye West via Twitter, causing both critics and fans to question the rapper's remarks in regards to his sexuality. Never one to shy away from the controversy, B is raising eyebrows again with the name of his new album, 'I'm Gay.'

While performing at Coachella on Saturday (April 16) in Indio, Calif., the West Coast rhymer took a break from his set to inform the crowd of animated supporters that he was about to shake up the music industry a little more. "I'm gonna do the most controversial thing in hip-hop," said Lil B. "Ya'll heard it first. And I'mma just show you that words don't mean s--t. I'mma make an album called 'I'm Gay,' right."

As those in the crowd burst into laughter upon hearing the Pack member's news, he continued to explain his reasoning for dubbing his new LP with such a bold statement.

"Now I'mma tell you why I'm the first person to do it in hip-hop and why you're the first people to know my reasons," the rapper explained. "I'm just gonna tell you. So many people be worried about what people mean and definitions of words and s--t... Now I like women, I love women, you feel me. But within yourselves, no matter what you do, it doesn't matter, it's like live life. You've only got one life to live. Be happy."

With a title like that, Lil B's forthcoming LP is sure to include some more surprises, in the form of artist and producer collaborations.

Lil B, born Brandon McCartney, has not publicly announced that he is in fact gay.