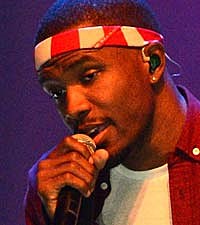 Frank Ocean will grace the pages of GQ's "Men of the Year" issue, and the where the Odd Future affiliated singer discusses penning a song for Quentin Tarantin's new film, working on his new album, and the reason he decided to publicly address his sexuality.

"Some people said, 'He's saying he fell in love with a guy for hype.' As if that's the best hype you can get in hip-hop or black music," Ocean tells GQ. "I knew that if I was going to say what I said, it had to be in concert with one of the most brilliant pieces of art that has come out in my generation."

Although he states that he had "fears" about coming out, he didn't let them stop him from making his decision.

"In black music, we've got so many leaps and bounds to make with acceptance and tolerance in regard to that issue. It reflects something just ingrained, you know. When I was growing up, there was nobody in my family -- not even my mother-who I could look to and be like, 'I know you've never said anything homophobic.' So, you know, you worry about people in the business who you've heard talk that way."

When asked whether he considers himself gay or bisexual, Ocean says only that "life is dynamic," and that he's not "trying to sell you sex" with his music,

"I'll respectfully say that life is dynamic and comes along with dynamic experiences, and the same sentiment that I have towards genres of music, I have towards a lot of labels and boxes and shit. I'm in this business to be creative -- I'll even diminish it and say to be a content provider. One of the pieces of content that I'm for fuck sure not giving is porn videos. I'm not a centerfold. I'm not trying to sell you sex. People should pay attention to that in the letter: I didn't need to label it for it to have impact."