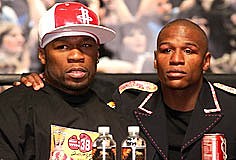 50 Cent is tapping his good friend Floyd Mayweather as an investor for his latest film project 'Tomorrow Today.' During a press conference at the Sundance Film Festival in Park City, Utah last weekend, the duo announced that they would be partnering together to bring the action film to the silver screen.

Although they remained mum on many of the details of the film, shooting will begin in Mayweather's hometown of Grand Rapids, Mich. this summer. 50 will also write and direct the project. The rapper says this time around he's more prepared. "I already picked out the DP for this action project," 50 told HitFix. "I kinda keep the same crews ... in this action situation I can use my juice card."

No stranger to West Michigan, 50 has shot four movies in the city, and previously planned on buying property in the area. And Mayweather's reason for joining the project is pretty simple. "...I won't be able to box forever," he says.

While 50's rap career appears to be a standstill, the Queens native continues to beef up his movie resume, and was at the festival to promote his films, 'Gun,' 'Things Fall Apart' and 'Caught in the Crossfire.' As previously reported, the G-Unit aficionado, alongside his producing partner Randall Emmett sealed a 10-picture, $200 million investment deal backed by George Furla's Hedge Fund Film Partners. The films, including 'Today Tomorrow,' will be produced by 50's company Cheetah Vision Films, and will be distributed through Lionsgate.