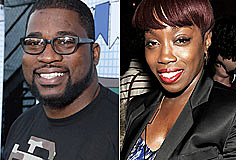 German luxury car company Mercedes-Benz has called on multi-talented Mississippi rapper-producer David Banner and U.K. singers Estelle and Daley to appear on a new single and in a video entitled 'Benz.'

Banner, who previously wrote, produced and arranged the song for Gatorade's 2010 "Gatorade Has Evolved" TV ad campaign, crafted the Mercedes tribute single with an updated version of rocker Janis Joplin's 1971 protest song 'Mercedes-Benz.' Joplin performed the song to show the disparity between social classes rather than sell automobiles.

The 'Benz' single will be released on iTunes on April 19, and the same day, Banner, Estelle and Daley will travel to Shanghai, China, where they will perform the song at the 2011 Shanghai Auto Show.

"That's why they call it soul music, you can't put an equation to what we just did," Banner said of the natural chemistry he found with his collaborators. "When we first put it together and listened to it, it was something special."

Banner's 'Death of a Pop Star' collaboration album with producer 9th Wonder was released on December 21, 2010. He also scored the lead dance sequence of the new 'Footloose' remake.