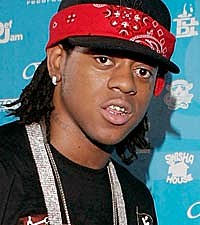 Former 'Making the Band 2' star Chopper City was shot while driving his Lamborghini in Michigan this past weekend, in what appears to have been a botched robbery attempt.

According to a recent interview with MTV, Chopper was driving through Michigan on his way to a show, when he got lost, his GPS failed and his phone died. Noticing that he was being followed by another car, he pulled his Lamborghini into a gas station, in an attempt to lose his pursuer, but found himself on the receiving end of a hail of bullets instead.

"He acted like he was walkin' past me ... and I seen him reach for a strap," Chopper explained from his hotel room in Chicago. "He started shootin' at me, and he shot inside my Lamborghini, and he hit me on my side. He looked at my jewelry, but I gave him that look like, 'You gonna have to kill me if you want this.'"

The New Orleans MC, who appeared on Da Band's 'Too Hot for TV album on Bad Boy in 2003, is thankfully out of the hospital, suffering a gunshot wound in his left leg -- though he claims his assailant fired four shots.

The would-be robber fled the scene empty-handed, while Chopper was rushed to the hospital, where he was able to charge his phone and call for backup.

"You shot me for nothing; I didn't do nothing to you, dog," he continued. "I just a young dude trying to do my thing. I just felt like that was an unnecessary crime."

While no arrests were made, Chopper has turned the incident into a positive of sorts, using the shooting as inspiration for the title of his next mixtape, 'Hard to Kill,' which drops on his 26th birthday, Jan. 22.

"I came up with it while I was in the hospital," Chopper explained. "They tried to kill, you ain't just gonna kill me like that. I ain't goin' out like that."