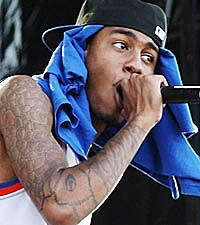 For the last two years, residents of Brooklyn's Williamsburg neighborhood have gathered on the borough's waterfront every summer Sunday to celebrate the concerts curated by Jelly NYC. The Jelly Pool Parties sample the finest indie rock, electro and hip-hop acts around, but have been marred with overcrowding issues at the East River State Park site due to their popularity. Yesterday was the last free show of the year and, after an abrupt cancellation a couple weeks ago, the show was later reinstated promising some big name surprise guests. Promoters came through big time for the most part. Previously announced acts Dominique Young Unique and Delorean were joined by the Cool Kids, DMC, Doug E. Fresh and Gucci Mane.

The Cool Kids fit in well with the Williamsburg crowd, harkening back to early party rap and making a series of heady stoner metaphors over bubbling 808s. Things got progressively crazier after their set, though. DMC performed a couple of his biggest hits such as 'Rock Box' before he was joined by lifetime party animal Andrew W.K. and Les Savy Fav singer Tim Harrington for covers of 'Tricky' and 'Walk This Way' respectively. As the Voice notes, he didn't sound at his best, but it was exciting nonetheless.

After a between set beatbox and harmonica jam session by Doug E. Fresh, Gucci hit the stage and did his live thing by screaming over his recordings. Riding more on the odd spectacle of a Gucci Mane concert in Williamsburg, the ATL rapper played a 20-minute set that blasted hits like 'Wasted' all over the neighborhood.